Knees and good friends, never take either of them for granted!

A couple of weeks ago I went down to Missouri to Purina Farms to the UKC Gateway show with a good friend, Tracie and a bunch of dogs.  Thursday Tracie was judging so I got to hang out and watch the fun.  Friday Wash and I ran agility. It was Wash's first time running agility in a new place, but he was perfect. 2 perfect 200s and 2 second placements.  Bentley and I tried obedience, but it wasn't to be.  Tracie and Bents and Bents brother Luxor played some rally too.   We all played in conformation all 3 days, where Peace took Breed 3 of the 6 shows which was enough to finally finish her UKC Grand Championship.

However, on Sunday while in the breed ring with Peace, my knee went POP and I suddenly couldn't stand on it, much less walk.  The pop was loud and it was extremely uncomfortable.  I spend the rest of the day grabbing people to show my dogs for me and icing it.  Thankfully I was traveling with Tracie and not by myself as I am sure I couldn't have gotten packed up much less gotten home.

Fast forward to this last weekend. I had my weekend all planned, Wash was going to do conformation on Saturday and his first CPE trial on Sunday.  Well thanks to the knee that was out.  But that same good friend Tracie offered to run Wash for me at the CPE trial.  I wasn't sure that he would after all, it was only his second trial at a new place, but my fears were unneeded.  Tracie and Wash did really well together, which made me super happy.  I think its wonderful that a young green dog could adjust to a new handler a new place and play new games. Wash and Tracie earned his CL1-F title, by qualifying in FullHouse and Jumpers.  Wash had a few baby dog moments, that caused an NQ in Standard and Snooker, but overall those runs were good too.

Here are my 2 favorite photos from the day.  I love the look of intensity on his face and while the dogwalk picture is not a great one, it does show how he was able to keep working even with a new handler and the judge right there! 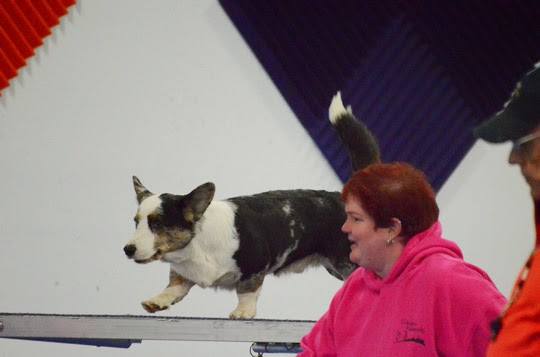 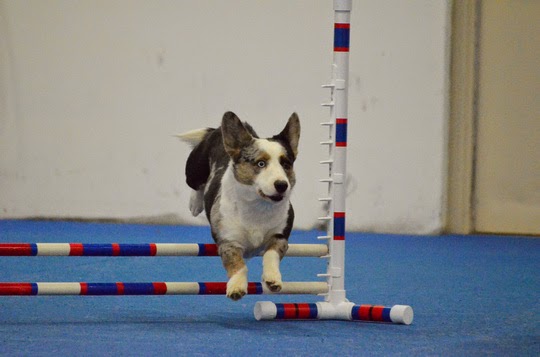 So even though I will be having surgery soon, I am still very pleased with the corgis!
Posted by Dawn at 7:37 PM