Well those 4 days just flew by. We had some ups and some downs, but overall it was quite a weekend. Magic and I worked pretty hard, and we managed to pick up the last 3 legs needed for his UACHX.   We ran 18 runs of agility, 6 rally runs and he played in the altered conformation ring for fun as well.  Peace was entered in 7 conformation shows where she took breed twice.

We also will be adding a new family member to the Daybreake crew. Bentley, an 18 month old GSD will be coming to live with us in the near future.  I'm pretty excited as I loved this girl when I saw her pictures in the whelping box.  I'm not sure what it was about her that drew me, but it wasn't to be. At the time I had 5 dogs and that is my city allowed permit limit.  Recently her breeder got her back, a very sad case of neglect, thin and wounded.  She has made a huge recovery already, and although I never would have traded Graces life for her, I feel this push inside that tells me that she would be pleased.

Hopefully she will be joining us and I will have pictures before too long! 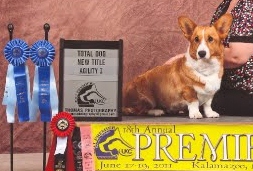 Grace passed away on 10.2.12  I had been dealing pretty well with her megaesophagus, for the last year.   Sadly though, we never were able to completely pinpoint what else was actually wrong with her.  The underlying condition that caused the mega.  We had been to an agility trial and conformation show the weekend before where she was her normal sassy funny self. She showed like the pro she was in conformation, smiling and wagging her tail the whole time. She ran agility and sassed and played and generally was wonderful, heck she even weaved that weekend.  But about a week later she crashed, where she ultimately went into organ failure so we helped her cross the bridge. To the end though, she was Grace, talkative and bossy, and she crossed the bridge while I held her and told her how much I loved her and asked her to come back to me someday.

Grace helped me become a better person and a better trainer, teaching me patience and persistence, she helped me learn how to live life with joy, she would take anyone and show them the ropes in conformation and helping them forget all about ring nerves with her bossy silliness.   She was a good mother to her children, as well as a good surrogate to all the guests we had. She was a special girl who's time was all too short.