Come on down to Zumbro Falls and have fun with us all at the Mn Mixed Breed Clubs first October pull.  We will be having a pot luck, and have some fun awards.  Grace will be showing off her usually fairly creative pull techniques, which while not very succesful is quite funny.  Hope you can come and have fun with us. 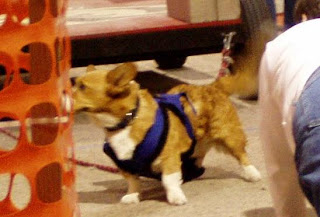 Yesterday was our 28th Anniversary, Earlier in the week it was the 30th anniversary of the day we met.  Hard to believe.  I certainly don't feel 30 years older, 15 maybe but not 30!  Although we both had to work, we had a nice dinner at home after Darryl got home, including some cake.

Today I took the girls to the local UKC show. There was a judge here who I had been reading on line, and I really wanted to see how he worked his rings.  So even though they are both pretty nekkid, I entered them in just one show so we could go out and have some fun. And we did!  I honestly have to say I agreed with everything he said, both good and bad about my girls.  He loved Peaces movement, told me she looks like she could herd cattle all day.  And he gave her a Group 2. Now it wasnt a big show, but there were more placements than that so I was very pleased.  Then I helped show a klee kai and a toy fox terrier.  Had a  really nice day, enjoyed spending time with many people. I took a chair along but the only one who sat in it was Peaceful.
Posted by Dawn at 7:17 PM 2 comments:

Wow, that week and weekend just flew by!  Last week I was doing a lot of overtime (unpaid but required, grrr), but that did make the week fly by.  Saturday I started my day with a trip to the farmers market where I picked up a big box of tomatoes. Since my garden did not do very well this year, I had to resort to buying some, but that's OK they will still taste just as good. Peaces Grand Championship certificate came in the mail too.  She got free cookies for that. I am sure she had no idea what they were for or why I was smiling so much, but hey cookies are always good, right?

In the afternoon, I drove to Spring Valley WI to play at an agility fun match with Christi and Carol, put on by Overdale Kennel where they train.  What a blast! The courses were based on USDAA courses which I have never done.  I had a great time, but Grace had the best time of all I think. She was a totally naughty dog. She got the zoomies on every course and went so far as to leave the ring in her last run.  I have heard people say that when dogs get zoomies it is stress, but really, she looked so darn happy to be playing you can't catch me I find it hard to think it was stress.  I really think its just Grace having fun and being Grace.  Not sure how we are going to deal with that, though. I don't plan on doing a lot of outside agility with her, but I really don't want to have to chase her around the park though!  She did get a 2nd and a 3rd but we could have done so much better had I not had to rein her in.

Magic ran 4 times and earned a 1st in both snooker and pairs, a second in gamblers and a third in starters. I had never run gamblers or pairs and really had fun doing these.  Even though we won the snooker round, we could have really had much better points if he hadn't jumped both the A frame contact and the first dogwalk contact. I may have to retrain his running (actually jumping) contact to a 2o2o.  It cannot be harder on his frame than the four footed landings he does coming off.

I was too tired Saturday night to do more than think about doing anything with the tomatoes, but I did make a plan for the next day. Sunday was rainy and yucky, but we started the day back at the market since I had decided I needed peppers and onions too.  Got back home and made a day in the kitchen. Threw on an audio book and made 2 pans of stuffed peppers and a pan of cabbage rolls. We had peppers for dinner last night, have some for lunches this week and will have the cabbage rolls tonight.  I froze 2 meals worth of peppers so later in the winter we will have an easy meal night.

Since I thought the first batch of onion jam I made last week had too much rosemary I made a second batch and combined it with the first.  Still a bit too much but better. End result 3 1/2 pints and 3 1/4 pints. Made another recipe of tomato jam, this time cutting out a full cup of sugar and peeling and seeding the tomatoes first.  I like it better. Came out with 2 1/2 pints and 3 1/4 pints. Then I did some salsa, well, David helped a bit since he was home by then.  I got smarter through and wore gloves cutting up the hot peppers this time. No repeat of the painful hands thank goodness.

The dogs took Sunday off. Everyone needs a day of rest right?
Posted by Dawn at 8:11 AM No comments:

Dandy's Mom, Krystal asked a question about basil cubes, so I thought maybe a short explanation post.  If your not interested in herbs, feel free to skip.

I like to save herbs in several ways for my winter cooking. My house does not get enough light to continue to grow herbs indoors, so I grow them outdoors in the summer and save them multiple ways. Air drying, dehydrated, and freezing.  In my earlier post today I commented that I was going to make basil cubes.  This is the freezing method.  There are multiple ways you can freeze herbs. My preferred ways of freezing them are by making ice cubes of each herb or herb mix with various liquids.  For example. When I process the basil tonight I will make some cubes of basil in olive oil, some in white wine and some in red.  I will freeze a few more cubes of basil that has been made into a paste with olive oil.  I will freeze a few in some softened butter.  I love this method as by doing them in the various liquids I can just toss a frozen cube into whatever i am cooking and the oil or liquid just adds more flavor to the pot.

Some herbs I will also wash and lay out on a paper towel very loosely, Then I roll this all up tightly, when I need some of that herb, I just unroll a section of towel and take some frozen herbs to throw in. This give you the herb flavor without the extra liquid, but I find that the herbs don't seem to retain as much flavor as long this way.

PS Krystal How is my favorite sable boy?
Posted by Dawn at 12:35 PM 1 comment:

Sure seems like fall is here in Minnesota.  Last night the temps dropped down into the mid 30's.  I don't like the heat and humidity of the summer, but it beats the cold snow and darkness of winter, but since I can't change that I have been preparing.  Canning of course!

Tried several new recipes this year, onion jam and tomato jam for some savory, making more watermelon jam this weekend for some more sweet. Lots of tomatoes for winter, canned and frozen, and also some peppers dehydrated.  Will be roasting and freezing some of those too, probably this weekend.  Have gotten some of the herbs done, but definitely need to do some more.  I am out of red wine for freezing basil cubes, but a quick run to the store tonight should solve that issue.

Honestly I have not been doing much of anything with the dogs.  I must need another seminar to get me re-motivated.  Good thing I have one coming soon!

I started working on a new quilt this weekend.  This one is denim and is using up all the old jeans the family has collected.  It should be cute when it's done, its like a denim version of an cathedral window, although not as complex with the folding and such.  Although all the cutting is by hand, all the sewing is machine done and there is no binding so once all the parts are prepped, sewing will go quick. Well, that is assuming it retains my interest and I don't start training the dogs again.

Laura Waudby the wonderful person that she is took some video of the kids last night.  Thanks Laura!

First up Magics Weavers run.  I messed us up at obstacle 5, but you can see he did not hold his start line at all.  We will work on that.

Tonight Magic Grace and I went and ran a little agility.  The MN Mixed Breed Club holds a Friday night games trial, just Hoopers, Weavers and Tunnelers.  Other than classes the corgis and I haven't been doing much agility, so I thought this might be fun.  And it was.

We started out with Hoopers. Grace was up first. She was so excited she got the zoomies. She has never done that before at any type of trial - I know I shouldn't say it but it did make me laugh. It wasn't too long, and I got her back and we tried the class.  We had a few issues, and we didn't qualify, but we finished the course, I created a plan and we tried it. Then it was Magic's turn.  I had a different course planned for Magic, but I decided to try him on the one I did with Grace, and he nailed it pretty well, right up until the end when he took the start line hoop and earned an E. It was my fault, I should have run the course I had planned for him, a or I should have realized that he would see that hoop as in line. Oh well.

Next up was Weavers, where Magic and I just were not connected.  I sent him off course on obstacle 5 and then we lost it in the 2nd set of weaves.  These were the off side weaves and well he is not as strong on the right. We need to work that.  We finished the course and his last set of weaves were very nice, so I was happy with that. No weavers for Grace because she doesnt weave.YET

Last was tunnelers. Grace was up first and although she broker her start line, the rest went pretty darn good. It started with 2 straight tunnels to a curved tunnel, and not only did Grace run those tunnels, she RAN them. Lots of speed-more than I get in class.  She handled the turns really well, had no issue with my doing a blind cross, and when I asked her to turn away from me and go she did, really cleanly.  That turn led to the final 2 tunnels heading out and she booked, she ran ahead of me and kept going!  It really felt like a nice run and I was smiling and so was she .
Last up was Magic's tunnelers run, and it too was very nice, faster than Graces, but not by a huge amount. Both qualified and Magic took first and Grace second.  Made my night. I have always loved playing with Magic, but overall I havent felt as connected to him as I did with Grace in her run. It just felt really good.