I am so happy with the progress Grace is making in our focus class.  Its always been a challenge keeping Graces attention. Little things like other dogs near her caused her to want to turn away and look at the other dogs.  (Probably due to the time she was jumped from behind when entering the conformation ring, it seems like she doesn't like to turn her back on other dogs)

Last night in class we were working on her mat, keeping focused attention, while other dogs were moving around. A little cocker actual stepped on Graces tail and she never took her eyes away from me, the most reaction she gave was an ear flick!  Good girl.

Now, the barking and conversing with me may never stop....she always has something to say!
Posted by Dawn at 7:21 AM 1 comment:

I hope everyone has a safe, happy Thanksgiving tomorrow. And I hope those of you who are crazy shoppers drive safely and get enough sleep to bear the crowds.

I am not a shopper, so might take in some dog events this weekend, or maybe I will just stay home and enjoy the downtime.  I hope you all enjoy your time and family too.
Posted by Dawn at 11:11 PM 1 comment:

Grace is not what I would call a reactive dog, but she is a very non focused/attention deficit dog.  In other words while she doesn't worry about or snark at  other dogs, she also wants to know what everyone else is doing/going/saying but also she wants everyone to  know what she thinks about stuff too.. So a few weeks ago we started a focus and attention class with our agility instructor.

Last night in class we worked on stays, recalls and toys/food distractions.  Grace was none to happy about the stays, breaking her stay fairly frequently. She was also not too happy about the recalls. or maybe it was the corrections for breaking her stay. When she breaks, her stays though, it does not appear that she is breaking because of the other dogs or distractions. So I think its more of a training issue than a focus one.  At one point after breaking her stay immediately twice, I of course returned after 5 steps or so and rewarded that she hadnt broke. Then I asked her to stay again and went about 10 feet, turned and called her. Grace in typical Grace fashion, came, but got 3 feet away stopped and started complaining. Silly girl.

She did fairly well though with moving through the toys and treats on the floor, only lunging occassionally. The funny thing is with Grace its not that she wants the toy or the food, like some of the other dogs. She just wants to know what it is, then she if fine leaving it. Just gotta get that sniff.

On the plus side, she is getting much better about laying on her mat and not caring what the other dogs are doing when its not her turn.  Last night she never left her mat once due to other dogs/people going by her. She only left her mat to jump on me and beg.  Good girl.
Posted by Dawn at 7:08 AM 1 comment:

I admit, I am lazy.  I dont work my dogs everyday.  I should, but I dont.  I need to find a way to get motivated enough to get my dogs trained.  I am thinking that maybe if I show this weekend at the ASCA trial, I might be motivated enough (by embarrassment) to actually train my dogs? Think that would work?
Posted by Dawn at 8:36 AM 2 comments:

Thought for the Day

Simply keep a place within you where it is welcomed, and happiness will come and abide with you forever.

~Hugh Prather
Posted by Dawn at 7:32 AM No comments:


I finally got around to scanning these.  He is very photogenic, me, not so much.
Posted by Dawn at 4:22 PM 4 comments:

She is so much like her mother, Grace. Love the happy face. 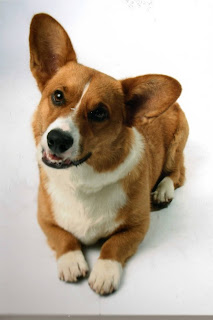 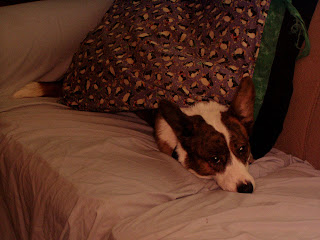 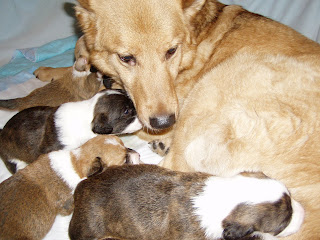 He wasnt a show dog, he wasnt a performance dog. He was just a really good dog.  Goodbye old man,
Posted by Dawn at 8:27 PM 18 comments:

A very nice fellow puller took a video of Magic pulling. This is Sunday when he pulled 635.  He also took some of Carol and her Pap Casanova and Christi and her BC Maggie who pulled over 1200. I wasnt aware he was taking these, but am very happy to be able to watch it.  As you can see, Magic talks alot, and that tail is always going. 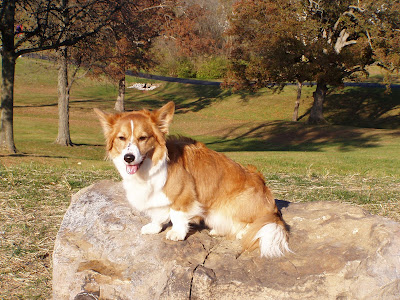 We are all simply exhausted. I had a great time in Missouri at the Gateway Nationals. Maybe too good of a time. I entered Magic in every performance event at least once. Magic worked his butt off for me and I couldn't be prouder of my little guy. Peace didn't get to do as much but was also a very good girl. I guess I can honestly say she is the winningest Cardigan in conformation ever at the Gateway Nationals, since she was the only one who competed!
On Friday we had the first weight pull, for Magic 2nd place and 15 points, his first coursing attempt, Q, and Peace also Q'd at the pull with a 5 point pull. Peace also was entered in 3 conformation events, but we only were able to make 2.
Saturday was the busiest. Peace again had 2 conformation shows, and she gave lure coursing a try.  Although she seemed interested when other dogs ran, she wasnt willing to run alone, so no Q.  Magic though was busy, we Q'd both AG1 runs, with a 199 and a 190, but had some trouble with the crawl tunnel and NQd both AG2s. Rally was 2 runs, with a 96 tied for first place but lost on time, and an NQ. It was late in the day near 7 PM and I apparently forgot what left means. His lure coursing run was great, another Q, but the dock diving we tried was not so good.  He was a little too nervous to jump in the pool.  I wasnt sure what he would do, he has only done it in a pond and the gorgeous pool set up at Purina was just to scary for the little guy.
Sunday gave Peace and I another 2 conformation shows, and Magic again pulled.  This time although he earned another 2nd, it was only a 10 point pull, but that was enough to earn his United Weight Puller Championship. Then we ran another lure, and earned the 3rd Q for his CA, coursing aptitude.  The judges thought he was the first corgi to earn one. In Rally, Magic and I managed another 2 Q's in rally which gave us our URO3-both 3rd places I think.  Poor guy this was the last event of the day and during his last honor sit, he almost fell asleep. His eyes were slowly closing and he was drifting off, good thing I could talk to him and keep him awake!
All in all a terrific time. I am planning on Premier in the summer, and hoping to have more dogs to go, so Magic doesn't have to do all the work! What a great boy he is.
Posted by Dawn at 4:06 PM 3 comments: