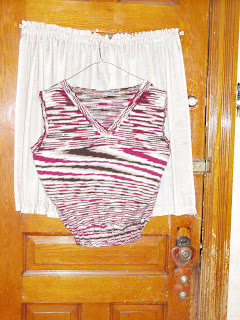 I did it, I managed to finish my vest before the closing ceremonies!  Maybe not a huge accomplishment, but for me, it was a big undertaking. I wish I could get Blogger to accept the picture!
Posted by Dawn at 8:09 PM 1 comment:

We had a great time in Des Moines today.  The Paws & Effect APDT trial was very nicely done. I wish I could have managed to stay and run tomorrow too.  Magic, Grace Darryl and I had an enjoyable day but I am glad the long rinde home is over.  Magic earned 3 double Q's today and also his Level 3 title.  Grace ran in one level one and one level 2 class and q'd in both of those too.  So we were 9 for 9.
Looking forward to the next one.
Posted by Dawn at 10:59 PM 9 comments:

Magic and I are going to Des Moines for APDT next weekend.  He did pretty well a couple of weeks ago, but I would like to do better. So we have been practicing a bit. It seems tha tMagic has completely lost his ability to respond to cerrtain word - important words. Words like Front and Down.  He used to know these things. Do dogs like husbands suddenly stop listening?
Posted by Dawn at 7:05 AM 5 comments: 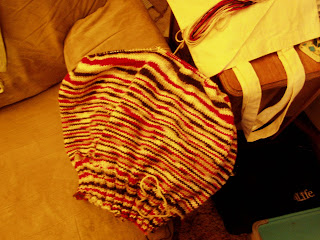 Its been a week since I blogged. I have been knitting. Work and knitting with a few training breaks for Magic.  My son David picked out yarn, needles and a pattern and gave it to me for Christmas.  So when the knitting olympics came up I decided to jump in.  I never thought I would be able to do a whole vest for myself in 17 days, and I may not, but I am pleased with how much I have done.   I just hope it fits!
Posted by Dawn at 10:34 PM No comments:

I signed myself up for the Knitting Olympics, over at the Yarn Horlots blog. Although I do not expect to truly finish my project, between the opening and closing ceremonies, it's fun to give it a try. There are about 3000 knitters taking on the challenge.  David gave me yarn for Christmas and I am knitting myself a vest. The Leftovers pattern by Alison  Hansel.  I knit about an inch worth of the ribbing tonight and then frogged it. Too much watching, not enough counting) So starting again. But thats OK! Just like dog sports, this is a fun challenge.
Meanwhile this is what the rest of the family is doing. 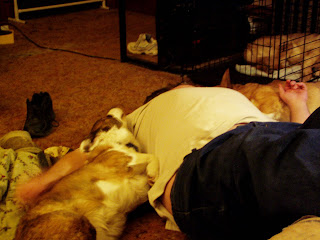 Pressure. Some people fold under pressure, some bloom.  I must be a combination of both, because I tend to put myself under pressure, yet at times I fold. Sunday was a good example. Saturday went very well, Magic was up were were getting decent scores. Sunday I decided that well if he did earn his level 2 in the first trial of the day I would go add level 3. Which I did, and then I fell apart. And it was so stupid too. First I NQ'd on the trial 2 level 2, then when I was walking level 3 the first time I had basically decided we weren't going to Q so just have fun and do the best we can, learning time.  Well, although not perfect, (Slow Downs, lagging on the fast) we did Q. So that should have relaxed me right?  Nope, got me more wound up and although we did Q in the 2nd trials level 3, it was the worst score of the weekend. Lots of little dumb things, for Magic again slow downs and some lagging, but also stupid Dawn thing, shuffling my feet, not making clean pivots.

Not really sure where I am going with this blog, its more for me to process the weekend. But I did sort of do it again.  I entered the Des Moines APDT trial. Now I need to see if I can get more happy heeling, see if we can learn some back end awareness and how ti down without taking a minute to do it.  No pressure, right?
Posted by Dawn at 6:51 AM 1 comment:

Well today was a riot.  More fun that yesterday, even if the scores were not a good.  Remember when I said we had to be perfect(all Q's) in order to make our goal of an ARCH this year, well, I mucked that up.
We q'd in both level 1 classes, and the first level 2 whiched earned our level 2 title.  But, I messed up a lovely lovely run when I did a station wrong.  The judge was so nice, she called me over before we left the ring and told me that I had screwed it up.  And then she showed me the score sheet for that run. NO points off, Magic ricked it.  Bad Mom. Oh well, went on to level 3 anyways.  We managed to q both level 3 runs, with first places, but our lowest scores of the day, a 198 and a 200.  Really not bad scores, but both Magic and I were getting tired by then and we both messed up a little here and there.

Overall it was a wonderful weekend, and I can't wait to do it again.  Both the club members and the competors were tremedous this weekend.  I had a great time with everyone.
Posted by Dawn at 8:39 PM 6 comments:

Magic was a very good boy today.  The day started out a bit rougher than I would have liked. His first on leash run in level one (on leash) he scored a 202 which was 5th place. He just did not want to be there. But it got better, the second level 1 he earned a 204 which was a 1st place. Then we went on to Level 2 (off leash), where in the first trial he earned a 209! Which was also a first place. Then in trial 2 he earned another first with a 204.  He was so much better off leash!. But the odd thing today was that all of the issues we had, were things we normally dont have a problem with. His downs were not pretty. He also for the first time ever, had a bit of a sniff in the figure 8 food bowls.  Oh well, not a complaint, just different than our normal issues?  Then to top it off, Magic earned high scoring club member today too. That was a surprise as we had just joined today.
It was really fun today being able to watch fellow bloggers.  I wont post for them, but there were some really good runs today. Tomorrow should be fun too, I hope!
Posted by Dawn at 7:15 PM 6 comments:

Magic is getting very good on the treadmill now.  He will trot at a fast trot for quite some time. Tonight while I was walking he went and got his toy and spent some time dropping it on the belt watching it go sliding off.   Such a funny guy.  It the top picture you can see Siren doing her front leg run. She still hasnt figured out how to get all 4 feet on there. 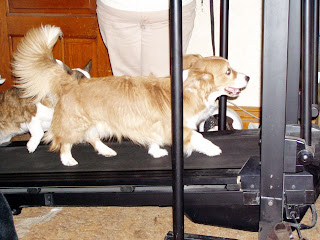 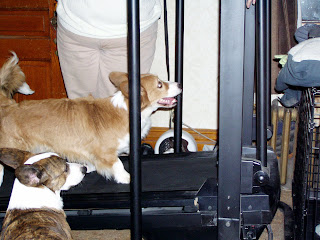 I am really looking forward to the APDT trial this weekend.  My goal for Magic was to earn his ARCH this year. In order to do this he would need to be 100% successfull in the next 8 trials, and earn high enough scores to earn the needed points.  Guess what, there are 8 trials in Minnesota in the year, 2 weekends with 4 each weekend. No pressure, right?  (There is one in Des Moines this month., that I might try to attend....) 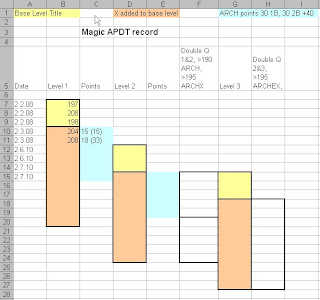 In order for me to keep track of where we are I created a spreadsheet. I am hoping that this will help me to be more organized, but knowing me, it might not.
Posted by Dawn at 8:36 AM 3 comments:

Magic is a great dog. I adore him. But the constant push to throw the ball will drive a body crazy. He will pester us for hours, going from one person to the next with his toy. First he shows it to you, then he gives it to you by dropping it in your lap. Followed by him pushing it into your hand, under your hand, then, if you let him, he will bring it right up into your face.
He will play fetch for as long as we will, actually preferring much longer. Stick, ball, frisbee, toy, dumbell, snowball, doesnt really matter what it is. He is great at catching too, but I get really nervous about all the flying into the air and the sometimes hard returns to earth. He has no concern over his physical limitations when it comes to catching.  He would be a great frisbee dog if I werent so worried about his back, legs etc.
Peace is starting to become as maniacal as Magic, with one exception, I have not yet been able to teach her to give me back the toy. she usually drops it when she returns. Grace will go out and get the toy, but then runs off with it. Lately, we have to be a bit careful though with the game-if it gets to intense, Magic and Peace will start scrabbling with each other. then usually Grace steps in and stops all the fun taking the toy away from everyone.
Working with this intense drive to fetch is great, but does have some limitations in obedience. First he gets so excited when he sees the dumbell, his brain shuts off. Sitting patiently for the command to go get it is a killer. And the world practically stops if the throw goes awry and we have to re-throw. then the ability to wait or to see the jump simply disappears.  But thats OK too. Its nice to have something after the horrible heeling part that does excite him. Too bad its only 2 tosses before the mean steward or judge takes that dumbell away.
Posted by Dawn at 12:21 PM 1 comment: 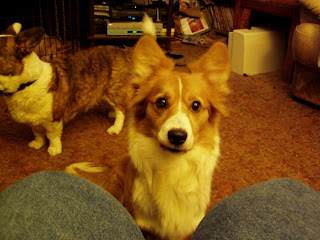 Mom. Its me. I'm not doing anything. 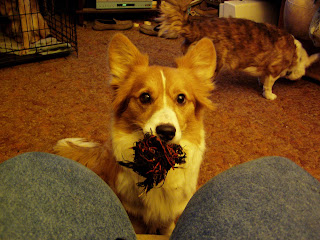 MOM! Look its the toy. 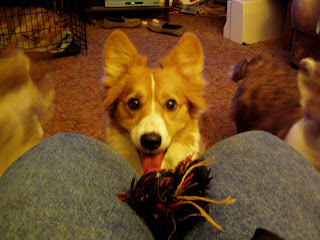 Heres the toy. See you have the toy. 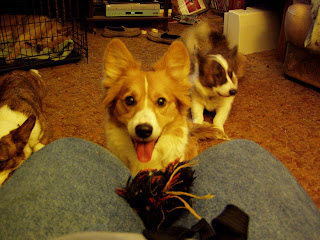 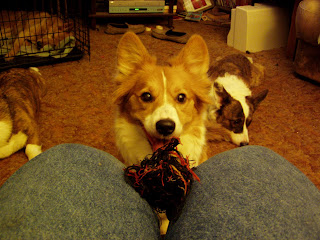 MOM! Throw the toy! Throw it, THROW IT! 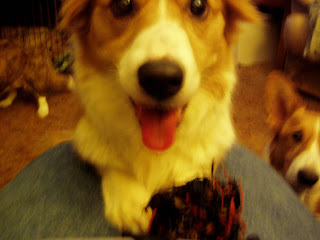 This weekend was the North Star Herding Group Clubs obedience and rally trials.  I think it was a success, and I sure hope the competitors think so as well.   We had a great group of people working the trial and it was so much fun to be able to watch the handlers and get re-inspired.  David helped out on Sunday, and seems to really be thinking he should get Rinnie into a class.  So I will get both Peace and Siren signed up for beginning obedience very soon.
Posted by Dawn at 8:08 AM No comments: