The year in review and a look forward 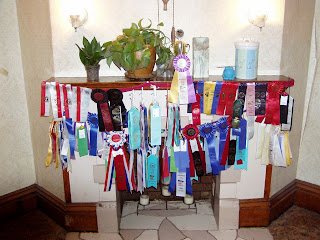 Last year I heard through the rumour mill that it was being spread around that I "really didnt do all I said with Magic".  The premise was that I never showed certificates and rarely ribbons or win pictures.  So this year I decided to collect all my dogs ribbons and see just how many we accrued in a year. Quite a bit it seems, considering how few shows and trials I attended this year. There were several months where we never went to any trials.  Not all Magic's, but this year all 4 dogs did something.  One of my favorites has to be the trophy on the mantle. No, not the high in trial one, see the blue croaker toy? That was Grace's Squeaker Award, the little stinker that she is!

This year Magic managed to earn a few titles, In APDT he earned his ARCHX and RL2X. In UKC he earned his UROC, including a high in trial in almost 100 degree weather outside, and his UCDX.  He picked up his TNN-S for NADAC. Magic really did not trial much this year, and only locally. Even with our few local UKC trials he managed so far to earn a spot in the Rally all stars. He is near the bottom of the list, so once the last few weeks of the year are tabulated he may fall off, but I am pretty pleased with how well he did, with several perfect scores this year.   We also picked up 2 legs toward his AKC coursing title at the only local test.

My plan for 2011 really was for Grace.  I had hoped to continue agility training with her and hoped to begin trialing. I had hoped to work on her obedience as well.  We were never great really, but she had a pretty darn good year too.  We went to the UKC Premier where she tried UKC agility for the first time, qualifying 5 out of 5 times to earn her AG1 including a couple of perfect runs, she also at premier earned a Total Dog. Later in the year we managed to squeeze out her UCD and URO2 also. This allowed her to qualify as a UKC Super Dog having earned titles in all the 4 performance events and being a breed champion.

Peace also went to Premier where she won breed in the Top Ten competition. She also took breed the following 2 days as well, qualified in the weight pull and also earned a Total Dog award. I was so proud of Grace and Peace for both earning a Total Dog award, mother and daughter.  Her 9 breed points earned at Premier have her in second place for this years top ten. A bit later in the year Peace earned her AKC Grand Championship   Peace took the rest of the year off, except for one day where we went to a local UKC show for fun where she took a group 2. Not bad since we just went that day to get out of the house for a while.

Siren and David did a bit of training together this year. For the early part of the year they did some nosework classes and Rinnie did great. She still thinks this is the best game ever.  They worked hard together at a couple of weight pulls where Siren earned her UWP, but also really started to pull well with her new personal best of 768 pounds! Now they are working on learning obedience together and hope to continue in the new year.

This year was a tough one with Darryl not working very much so we did not show as much as I would have liked.  Then recently Grace became ill, we are still learning about her limitations, but hope that perhaps we can still play on a limited basis. Time will tell on that one. I really don't have any hard and fast goals for 2012, but I do know the year will involve the dogs however it can. minor goals would be CDX and CA for Magic, and hopefully getting to go to premier to compete in the all stars competition. For Grace we will just have to see how she handles living with mega e and whether we can continue to play without endangering her.  Siren will continue to learn. I would like to try for Peace's UKC grand, she needs 2 more legs.

I would like to perhaps think about another puppy, so I have something to play in the show ring with, but I can not decide that until I see how Grace does. I am starting a new job in a couple of days and so is Darryl, so I am hoping for a much brighter 2012.  I wish you and yours one as well.
Posted by Dawn at 3:59 PM 6 comments:

The best of the Bad, or I need a new camera! 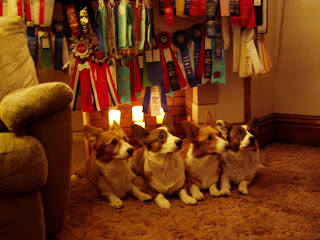 We tried to take a group photo, but the speed of my old digital is just not up to 4 wiggly dogs. Oh well
Happy Holidays Everyone!
Posted by Dawn at 8:00 AM 2 comments:

I haven't been posting much lately. Things around here have been a bit difficult.  But I think I am ready to talk a bit about it.

Tuesday Grace was diagnosed with Mega Esophagus.  This is a condition where the muscles in the esophagus essentially stop working and it gets all stretched out.  Basically she has very little ability to swallow. In adult onset, its often due to another condition called Myasthenia Gravis. We are still waiting on the lab test for this, but her symptoms are very likely.

What this means for us and Grace is that we now have to be much more involved in her eating process. Since she can't swallow, all her food has to sort of flow down her throat. We now have to feed her in a totally vertical position and then continue to hold her up for about a half hour for the food to get all the way down. Otherwise she coughs it back up which can lead to aspiration pneumonia, which the radiologist thinks she was already developing. And she needs 4-5 small meals a day.  She can't drink any water herself either, and must get her fluids from her foods.

Its been a tough week absorbing all this and starting to change the way we do things here.   We are going to build her a baily chair which is used for feeding, but we havent been able to do that yet. None of us are woodworkers, nor do we have the proper tools, but I am hoping we can figure this out.  I think it will make her life and ours a little easier.

I am going to try to not let this condition take over the blog, but this is a huge part of our lives now, so I will apologise in advance.
Posted by Dawn at 11:13 PM 8 comments: