Yesterday David and Siren competed in the first Midwest area Nosework trial. I am so proud to say they earned their NW1title.  Rinnie is David's dog and has been since almost from birth.  He fell in love with our little curly girl and has been doing a wonderful job with her.  They have worked hard to earn first her UWP and then her UWPCH (weight pull Championship) and now NW1.  He says tracking and lure coursing are next, and hopefully NW2 as well.

Nosework for those not familiar is scent work where the dogs learn to recognize a certain scent, in this case Birch. The training and search work is done very much like what bomb or drug dogs are taught. The dogs learn to search an area for the specific scent and to point it out to the handler in some way.  Our judges at the trial yesterday in fact were all working or retired police officers-all dog handlers, one is a bomb dog handler.

At a trial there are 4 areas each dog is required to search. There were 48 dogs trialing, divided into 2 groups of 24  Each group was assigned to work 2 areas before lunch and then the other 2 after lunch.  The trial was held at a older unused fairgrounds, so the buildings were the typical large metal fair type buildings.  David was dog 2 in group 2, so his first search for the day was containers.  There were about 24 identical white boxes on the floor of the first building.  For containers the dogs have 2.5 minutes to find the right one, the other 3 have 3 minutes time.  Rin found hers in 41 seconds. Not a bad time, but certainly not the fastest. Siren tends to search all the boxes or space and then go back tot he one with the scent after she has checked everything.  Her first find.  Then they immediately moved to the next building which was the vehicle search.  It was rainy yesterday morning, so it was nice that the 3 vehicles were inside the building. 2 cars and a van.  David and Siren left the start line and started on the cars, Rin checked each of the first 2 cars with no real hesitation or indication of scent, although at one point she wanted to go toward the back of the building-not sure if the scent was pooling back there or if she just thought she saw something. She moved on over to the van where she started at the nose and moved along until suddenly she indicated. There was no hesitation here at all.  Nicely done in about 1.15. This was her longest search time, but she was clean and accurate to the point where the judge clearly knew she had found the scent.  The judges have to know the dog is right, and if they are uncertain that the dog is finding the actual spot they will ask the handlers where the scent is and they have to be able to say. Apparently several dogs had the general location right, only to find out they were just a bit off where when asked they gave a wrong hide spot.  Siren had her nose right on the scents spot so it was clear.  Then we were done until after lunch.

After lunch David and Siren were up for the exterior and interior searches.  The exterior search was a large area that looked like it had been a small stage built out of large blocks of patio stone or retaining wall bricks. Because this is a fairgrounds not in use, there was a lot of vegitation on and around this structure.  David was really nervous about this one, since Siren sometimes forgets she is working when outside, and eliminating in area is a fail.  the area was marked off with cones and the hide was somewhere in this space.  Siren entered the areas and seemed to lead him right to the back of the space. She worked her way along the base of this stage area to about midway point where she turned around and went back, There was a large light pole right by the obstacles, she searched her way around the pole causing David to have to do some fancy leash work so not to be tangled, but she clearly pawed and nosed the base of the pole and indicated she had the hide.  And she did!  What a relief-under a minute and she nailed it.   From there we went across the street, to an old abandonded food shack.  This was only search I could not watch since it was off leash inside a closed building.  Her search took only 30 seconds inside and according to David she went in went by the hide ran a quick search around the room and came back to alert on the spot just about 3 feet inside the door.   All I know is David came out in tears with a big grin! Rin was the first dog of the day to be successful in all 4. 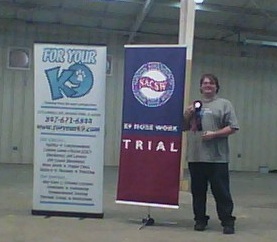 At the end of the day they gave out all the awards. There are ribbons awarded to the fastest 3 dogs in each search.  It was simply amazing to me that some of the dogs had times under 5 seconds. WOW. Although Siren was not the fastest, she was consistent and thorough and she was successful.  The overall end results were that about 75 % of the dogs passed the vehicles search and 80% or more passed all the other areas. Overall 55% of the dogs passed and earned their titles.  And there were many many tears shed, but all that I saw were tears of relief and joy.  I know I was pretty proud of my kid and his dog.

Just got an note from Davids trainer Jane, apparently they are the first NW1 team in Minnesota!
Posted by Dawn at 3:44 PM No comments: 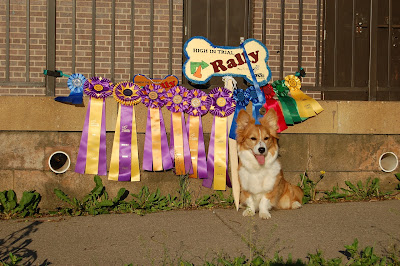 Christi and Maggie and Magic and I took a little trip this weekend down to Cedar Rapids Iowa. It's true that I almost always have a good weekend when I am doing dog stuff, but this one was super. Probably because I was with really good company.  I enjoy spending time with Christi, and we sure don't seem to run out of stuff to yak about.  We went down for the 4RK9's Obedience and Rally Trial, and since we were so close to CIndy's we were also able to spend some time there which was also very nice. Cindy and David were wonderful hosts, and to make it even better I got to hold the babies, and play with the older pups and the chickens!  Simply cannot beat that.

Unfortunately Maggie did not seem to be feeling well this weekend, and while she worked for Christi, there was a bit of a disconnect.  She did well, easily qualifying, but it just wasnt quite as pretty as usual.  Hopefully by Premier she will be back to kicking our butts, which truly was my expectation.

I have been having some issues with Magic lately expressing how much he would rather not play in the obedience and rally rings any more. He has been showing his lack of interest with less and less enthusiasm toward working. I have been worried about that, and had decided that this weekend I was going to try to find the right mix for him.  So we did a little bit of obedience mixed in with the rally.  I think I was pretty successfull in finding the right buttons to push. We were not perfect, but I saw some huge improvements in the performance, but better yet, I saw some desire start to show. Not lots, but enough that I think maybe I am going in the right direction.   In fact yesterday we had the best NQ ever. The score sheet brought tears to my eyes and not because of the NQ.  We only had 1.5 points off on heeling in open!  He was heads up and happy motoring along.  What a joy.  Of course we mucked up the drop on recall with an anticipated come, and went down on the long sit, but truly I am OK with that since that wasn't my goal. 1.5 I was tickled.

Over the course of the weekend, Magic manage to earn the high scoring herding dog 3 times, High in Trial twice, and also earned his URX2.  That one was fun since Christi and Maggie earned their URX on the same two runs.  Not to mention they picked up their UROC!  The MN/WI gals had a pretty darn good weekend!

(photo taken when we got home, Magic is squinting, but I wanted a picture of it all together-I dont anticipate having such a weekend again so wanted to keep a remembrance)

Please forgive me for not posting in such a long time.  We have been busy, I just haven't had the energy to sit down and post about all of our doings.   So for today a quick recap.

Magic Grace and I ran some UKC agility at the UGSDA trial.  Some good, some, well, not so good.  The good Grace qualified and ran AG1 really nicely. AG2 not so much. Magic ran AG 2 fairly well but not really well enough to earn any points. Since we are working on his championship, he needs to score 196 or better and we just can't quite get there consistantly.  Then a couple of weeks later Magic and I took a quick trip to Peoria and ran some more UKC. this time we were a bit better, picking up points in 4 out of 8 attempts.

Magic and I also did a little bit of Rally at the 2 trials, again OK but not great.  Our heeling is getting worse as time goes on.  Oh, when I have food or toys its lovely, but in a trial-nope not gonna do it. Oh well.

David and Siren earned her UWPCH at the weight pull.  They are getting ready for the nosework trial at the end of the month.

Peace and I went to the International show in Hutchinson. She earned her INTL title and went best bred by in show both shows on Sunday.  The international style show is very interesting with the multple judges. I dont know that we will continue to go to them, but it was fun to play.  Peace and I have also been learning tracking, and she really seems to like that.

So what have you been doing?