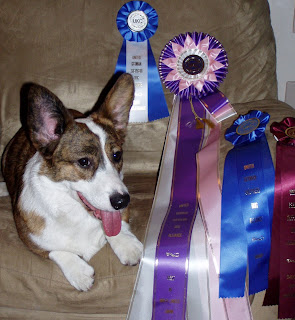 Blogger would not let me post the big ribbon picture last night. The thing is 40 inches long! Not sure what to do with it, but its definately a keeper. 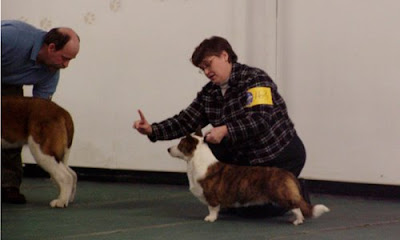 I am still in shock, but so very pleased to say that today Peace, Daybreake's Peaceful Dreams won Best in Show! We had no competition in the second show today, so I was seriously considering not staying for group, as the only way she would earn a win toward her title was if she placed in group. Well, we hadn't placed in group all weekend, and there were some darn nice dogs there, but we decided to stay. In group I was not expecting a placement, hoping for a 4th, but not expecting, so when the judge pointed at us I actually looked behind me to see if there was another dog there. But there wasn't! I was so shocked. Then when we went in for BIS, I was so thrilled about being there. He picked his reserve, and then turned to us at the end of the line and pointed and I almost fell over. All I can say is THANK YOU Judge Stuart Lynn!!

Earlier this year I said that I had some goals for the year. Today we met the first one. Grace earned her UKC championship today. Next up for Grace is her last leg of her RA. Need to plan when to go to a rally trial.
Posted by Dawn at 9:40 PM 3 comments:

Tonight was bath night for a couple of the dogs, Magic and Siren. I really wish I had the camera handy, and someone to film it, because Peace was a riot. She has always been a busybody. Tonight though she was just so funny. She now tries to bite the air coming out of the dryer. Now, I have a pretty strong blowing doggie dryer, and she will stick her face right into the air and try to bite it. Her cheeks puff out, her eyes are slitted shut, but she is determined to catch it. Do you know how hard it is to dry a dog with another dog in the middle??
Posted by Dawn at 9:53 PM 2 comments:

OK Spring you have arrived, now can we stop with the moisture for a while? Our yard is mud, mud and more mud. I mopped the floor yesterday, and today have a new trail. I would like to get the mud off a dog or two, or 5, not to mention out of my house. AAHHH yuck!
Posted by Dawn at 9:18 PM 1 comment: 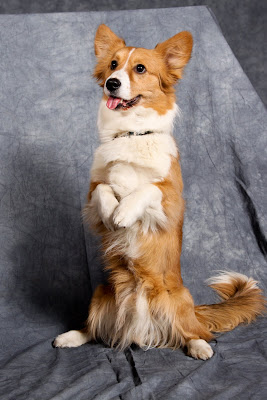 But no pictures today. Both David and Darryl were busy working today, they learned how to work the cart- be the brakes and properly load the bricks. I am getting a couple of pictures from the photographer so I will post them when they come. Its funny though, with weight pull you get lots of handler butt shots.

There were a few questions in the comments so I will explain a bit. This event was UKC but there are others as well. I guess they have slightly different rules, different distances, time allowances and classes. In UKC you pull 16 feet, and have 60 seconds to do it. Classes are by the dogs weight, and since Magic is a small cardigan, at 26 he was pulling in the 16-30 class. The dogs do have to get weighed in for the weekend. They come into the pull chute and get hitched to the cart. You can't touch them once you start the pull, if you do its a foul. If they touch you, its a foul. You get 2 fouls before you are eliminated for the day. If you foul a pull, you get to retry that pull, right away and see if you can make it. They are not on leash for the pull. In UKC you can be right by them, you dont have to go to the end of the chute and call them, so many handlers get on the floor to encourage them. The front tire of the cart starts on the line and as soon as it hits the 16 foot line the pull is done.

Magic took 2nd in his class both days(of 3 yesterday and just the 2 today). He beat his pull yesterday by 90 pounds pulling 360. We almost got the 390 but couldn't quite get it. He was beat by a darling Alaskan Klee Kai who at 16 pounds pulled 450 I think. The high pulling dog today was a Saint Bernard who pulled over 3100 pounds and highest percentage was a samoyed who pulled over 38 times his body weight.

So, I think once we get some jobs in this house, and I can afford more than an occasional splurge I think I will order a pulling harness. When I do we can practice and Griffin is more than welcome to come try it (they need to be a year old to pull in competition, but I think older would be better, when growth stops) . It was a lot of fun, everyone was so great about helping others and cheering. I definately want to go back and get Magic's last leg for that title. For you Minnesota people, MMBC is having a big weekend in July with Obedience, Family Obedience,Rally, and weight pulling in conjunction with another clubs conformation show. I am hoping to be able to attend. If anyone wants to see the how to train information I received, let me know and I can send it to you.
Posted by Dawn at 5:24 PM 2 comments: 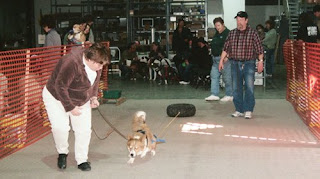 Today I really needed to do something dog. MN Mixed Breed Club was hosting a weight pull and a beginners clinic this morning (for $10 bucks, really a steal!)
We were able to borrow a harness and first we pulled a tire. Not sure of the weight. 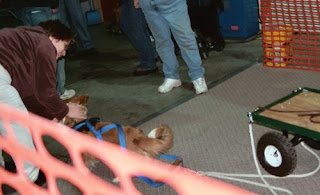 Then we pulled the small cart. 60 pounds empty.

Then we pulled the big cart, empty it weighs 300 pounds.
Our last pull in the clinic was the 360 pounds. Not too bad for a first time. 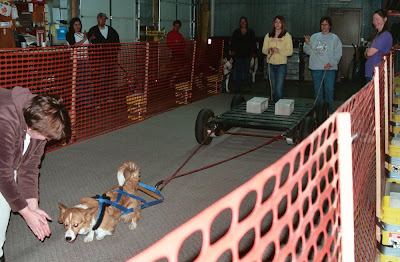 So we decided to stay and enter in the actual weight pull. The small dogs start with the small cart, and he made it up to 240 pounds. The smaller cart is hard to start moving when it is loaded and he just couldn't get it to go at 270. But 240 was enough to earn his first weight pull leg! They need to pull 8 times their weight for a leg. 2 more to a title.
I love this dog, he is so willing to try stuff for me!
Posted by Dawn at 5:31 PM 5 comments: 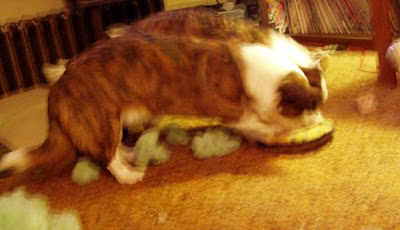 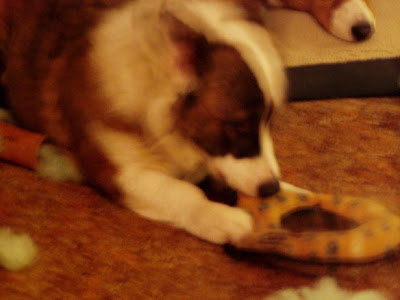 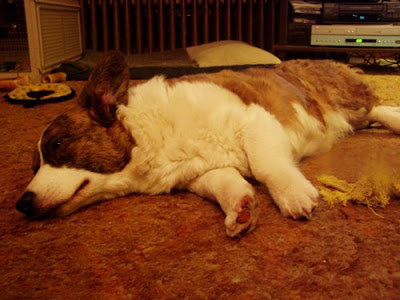 according to she who says she is my friend. I get this call today telling me "You idiot- you rarely post about the bad stuff so no one knows what you are talking about" and she is right, I don't. Actually she called me Sh*t for Brains. (Thanks Dear, I needed that!) So briefly let me just say things have been pretty rough lately, mostly finacially related. Both Darryl and David were laid off, my job cancelled all overtime, and we are barely scraping by. To top it off we have had some serious medical stuff going on too and well, I am trying not to think about it, so I don't write about it.

So the dogs and I aren't going to the National, we can't afford shows and are training for fun at home. I am considering placing a couple of the dogs, so if anyone is interested in any of them, let me know.

Speaking of the dogs, so how do I stop the corgi pup who isnt supposed to be jumping yet from leaping over the baby gate???
Posted by Dawn at 6:27 PM 7 comments:


Friendship isn't about who you have known the longest.
...but about who came and never left your side.

I got this from another group today and just thought I would pass it on, and to say a big public thanks to my friends who have stood by and been so understanding lately with all the stuff we have had going on here. Thanks!
Posted by Dawn at 5:20 PM 2 comments: 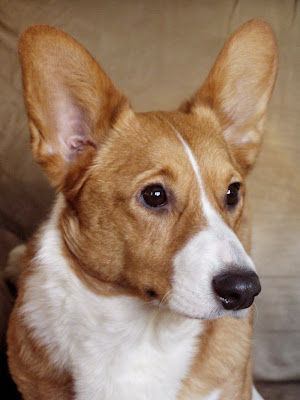