Took all 4 dogs today to a lure coursing fun run.  It was a straight course run, about 100-150 yards ( I am guessing as I really have no idea) It was a really great way for inexperienced dogs to try it.  Magic ran first and of course had a blast_he ran to the end, shook the lure and turned around and ran back to me.  Then Grace ran, she ran most of the way, but when the lure stopped at the end, she turned around and ran back to me. I think she watched Magic.  Then it was Sirens turn and she did really well, never took her eyes off the lure and ran focused all the way.  Peace was last up, and she hadnt been outside a tthe time to watch the other 3, so she was a little less sure. I had David start her and I went to the finish.  She ran 3/4th of the way, but when she got by the equipment. lure operator and photographer she did get a bit distracted and stop.  But I called her name and reminded her to get it, and she started running again, and did zig after the lure. So all in all I feel like it was a very successful day!  Magic did grumble something about wanting more, but we had to come home so Grace could eat, so we only ran the one time.
Posted by Dawn at 5:58 PM 1 comment:

Sunday up in Duluth Grace and Magic both earned their TBAD and TG1 titles running teacup agility.    The video is one of the games, Minuet, where the goal is to run the loop as many times as you can.  Magic managed the most of any dog there! And Grace was like 4th overall.  Grace also managed her first intermidiate level Q and she weaved nicely in 2 runs. Small accomplishments to some, but huge for us.  Grace also managed to run 8 times with no health complications.  If you watch the video of Grace she will loudly tell you how much fun she had, she has never barked quite so much as she did up there! Go Gracie!

Here is an older video if Rinnie pulling.
Posted by Dawn at 5:31 PM No comments: 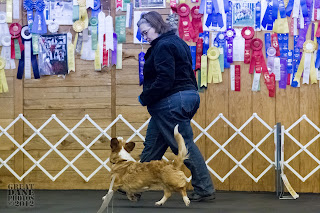 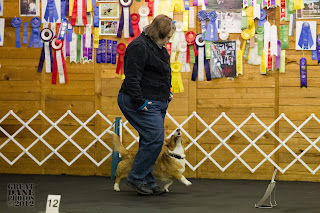 Grace actually can heel pretty nicely when she chooses too. 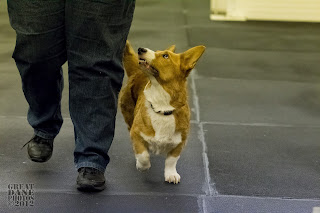 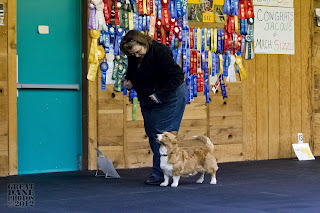 Apparently the stand command is not her favorite. Love her expression! 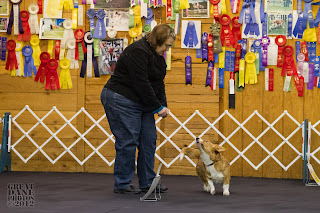 And here she is telling me something. I am sure I did something wrong. If funny through all the pictures, either Graces mouth is going or mine is.  We must chatter nonstop!  All photos from Great Dane Photos.
Posted by Dawn at 5:08 PM 1 comment:

Last weekend Grace, Magic and I tried to run teacup agility. In teacup the equipment is smaller and the courses seem tighter. I chose this as Graces first attempt back to agility since she got sick since I thought the smaller trial, smaller equipment and nice local location would make it easier for her.  Well she was amazing as far as her health and happiness. She never stopped wagging and smiling the whole weekend.  She ran 6 times total, and we actually qualified 3 times, twice in standard and one game. In her second run of the weekend she started to give me serious attitude, so she got pulled off the course, but the rest of the times she was wonderful. We had a few bobbles, heck we are out of practice but overall she was terrific and I was so proud of my pumpkin girl.

Magic only went on Sunday. He ran all 6 classes and qualified 3 times, 2 games and one standard.  His issue was leaping contacts. We really may have to consider changing to a 2 on 2 off. Running is not working with him at all.  On the positive side, while he was a wild man, and we had a few miscommunications overall he tried really hard and I can't fault that. I messed up both dogs a couple of times when I forgot which dog I had and handled wrong.  I need to work on that! But thats OK we have plenty of time to play together!
Posted by Dawn at 10:02 PM 2 comments: