Last weekend Magic and I went and ran some CPE agility. We had a pretty good weekend overall.  Magic and I ran 7 times together qualifying in all of them.  Magic also ran jumpers with our friend Tracie. It seems that I filled out the volunteer availability wrong and so was in the ring working when our turn came up, so when I said just scratch us, Tracie asked to run him.  Although they did not qualify, they ran pretty well together, with only a couple of bobbles including the wrong end of a tunnel.  I was quite impressed actually, since this was the first time he had ever run with anyone else.  Such a good boy.

The next couple of weekends are obedience trials that I chair, so Magic will get to take some time off.
Posted by Dawn at 7:42 PM No comments:

This weekend was our first dog event for 2013, On Friday the Northstar Herding Group show and then the weekend was the Land O Lakes show.  It was Wash's second show weekend, and he had a pretty good one.  On Friday first was puppy sweepstakes.  Wash took second to his brother Malcolm, but then in the show, Wash was Winners Dog and Best of winners for a 3 point major.  On Saturday he repeated WD and BOW for 4 points.  Today, he was reserve to Malcolm.  Not a bad weekend for the boys at all. Later this afternoon, Wash was able to go in the ring with Meredith, his co-owner for juniors.  It was a large class of 22 kids, so Wash had to be a good boy for a really long time.  Although I thought Meredith handled him very well, they did not get a placement. However I think it was an invaluable experience for an 8 month old puppy.

Our one issue this weekend is that Wash was showing a few signs of stress. At least I think it was stress. On Friday we ran into a friend of mine who gave me a hug.  Wash immediately started barking and growling  Initially I thought maybe he was trying to protect me, but I am really not sure.  He showed signs of being concerned about new people several times over the weekend. I am hoping it is an age thing, or a hormone thing, or just something we can work through, but I will say its something that made me a bit concerned.  So I am pretty sure the little man will be taking a lot of excursions in the very near future-out and about to learn about life.

Overall though, a pretty fun weekend.
Posted by Dawn at 8:11 PM 3 comments:

I have such mixed feelings about this last year. We had some really incredible moments, and some very difficult and sad moments.  Last year at this time, I had set a few goals, some were met, some not, but overall the Daybreake crew exceeded my wildest imaginings.

Sadly though, we lost Grace in October.  It was a low point of the year. Up until she started to fail, she had a good year. Just the weekend before, she had been playing in both agility and conformation and had a wonderful weekend.  She will never be forgotten, she gave me so much. She taught me patience, she taught me persistence, she taught me joy. She was always herself, and taught me to be myself, no matter what.  While physically she is gone, she lives on in her daughters and in our hearts.

Some highlights this year:
Siren earned the first NW1 title in Minnesota, and passed her ORT for level 2.
Peace earned an International championship
Grace earned 2 agility titles, TG1 and TBAD, as well as a few qualifying runs in other organizations.
Bentley picked up another leg towards her Grand Championship with a group 1 just a week after she came to us.
Wash earned his first point toward his championship.
Magic was amazing, earning first his UROC and UACH at Premier, then his UROG at a local show and his UACHX at Gateway. We earned 5 high in trial in Rally. We picked up several other agility titles and his AKC CA. But the most unusual would be the day he earned his NDD-Novice Draft Dog from the Bernese Mountain Dog Club.  Pretty fun playing with the big dogs. 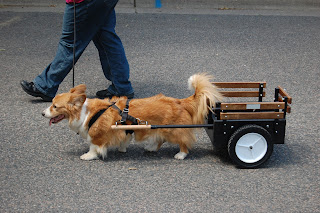 Remember when I mentioned wildest dreams??  Well how about Bentley winning Winners Bitch at the White GSD National, or Wash earning his BN at the Cardi National? Dreams are OK right?

From all of us at Daybreake, we wish you success, joy, peace and love for the New Year.